Today, I’ll take you through some of the most popular roles in cloud, covering: how much they earn, how technical the roles are (e.g. if they write code, how much), and if the role is suitable for a beginner and why. Then, in the end, I’ll make you some recommendations about where I suggest you should start. 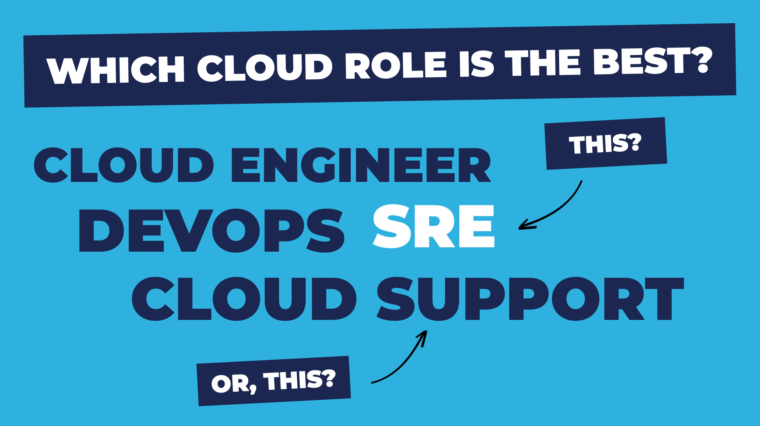 Let’s start to break these roles down.

To make things easier, here’s an overview of the different roles. I created this visualization so you can easily compare different aspects across the different roles, understanding how much the roles can earn, how much coding is usually involved, and if the role is (generally speaking) suitable for a beginner. Of course, to make this visualization, I had to make some generalizations, and of course, there always are exceptions and things that “it depends” on, so let’s dive into the details of the different roles to understand them better.

Responsible for the high-level design of software systems. An architect usually requires deep expertise in the many technologies that they use in order to facilitate considered decisions. Architects usually start their careers in other roles, like software engineering.

💵 Earning potential? High, $137K USD (Source) – Due to the wide impact the architect can have on a company, and the depth of skills that are often required, the earning potential for cloud architects is typically high.

💻 How much code? Low – An architect usually is not required to write much code in the day-to-day. However, an architect is often expected to keep up-to-date with trends in the industry, to ensure they make informed decisions.

👶 Suitable for a beginner? Low – Due to the depth of knowledge required, architecture is often a difficult role for those new to the tech industry. There are some exceptions where larger companies, such as the cloud providers offer schemes to help less experienced candidates step into the architect role (such as AWS Tech U).

Ensures reliability and stability of software systems. The SRE spends their time gathering data about the systems they operate through “telemetry”. The SRE role suits those who like data and investigations. SRE’s are also responsible for configuring and creating processes around responding to incidents or outages, which makes the role also quite people-focussed.

💵 Earning potential? High, $128K USD (Source) – SRE’s are required to have deep knowledge of the systems they operate, write code, influence stakeholders, and set up processes, all of which can make the SRE role quite challenging, and as a result, compensation is high.

💻 How much code? Medium – SRE’s might not write as much code as a typical software engineer, but they certainly write code. Knowledge of how underlying applications are created is essential to an SRE, to allow them to instrument and support those systems.

👶 Suitable for a beginner? Medium – Whilst an SRE is a technical role, it is feasible for a beginner to aim to land a role as an SRE as some companies will offer junior positions and be willing to train an SRE. However, due to it’s technical nature, it’s not an easy role or skillset to pick up.

💵 Earning potential? Medium, $108K USD (Source) – Compensation for software engineers varies depending on the type of role and company, but generally, the earning potential is quite high.

💻 How much coding? High – Out of all the roles in cloud, the software engineer has the most technical and in-depth coding knowledge.

👶 Suitable for a beginner? Medium – Whilst it’s not easy to land a job as a software engineer, it is one of the most well-documented routes into tech and the cloud industry.

💵 Earning potential? High, $111K USD (Source) – The cloud industry is constantly changing, and keeping up can be a challenge, which is why the cloud engineer role is also highly compensated.

💻 How much coding? High – The cloud engineer is very hands-on with writing code. Cloud engineers will often write more “infrastructure as code” than application code.

👶 Suitable for a beginner? Medium – A cloud engineer is a highly technical role, but some companies will offer junior positions. The skillset for a cloud engineer can vary dependent on the technologies used in the company.

The DevOps role is often quite varied in expectation and can involve tasks similar to that of a cloud engineer, SRE, or platform engineer. However, in some cases, the DevOps engineer is considered responsible for the delivery and operation of software systems, which typically means working on build and deployment (often called CI or CI/CD pipelines).

💵 Earning potential? High, $105K USD (Source) – A DevOps engineer is sometimes a jack-of-all-trades, requiring skills in many different areas of the tech stack. Due to the high skill requirement, the compensation is high.

💻 How much coding? High – Much like a cloud engineer or SRE, the DevOps engineer won’t write much application code, instead, they will typically write more infrastructure as code, and build and deploy pipeline configurations.

👶 Suitable for a beginner? Medium – DevOps can be a challenging role to apply for, due to the varying interpretation of the role, however, by building the right skills, it is possible to land a job as a DevOps engineer.

A data engineer is responsible for handling a companies data, and putting it to strategic use. Company data is often used to create company insights to guide decision-making, or the data could form part of the product or services of the company itself. It’s the data engineer’s job to help get that data from its source, cleaned up, and structured for analysis.

💵 Earning potential? High, $112K USD (Source) – Data engineers need knowledge of the systems they are extracting data from, understanding of how to build data pipelines, and analytics. Due to the highly technical nature of the job, the compensation is high.

👶 Suitable for a beginner? Medium – Whilst a strongly technical role, some companies will offer junior positions working as a data engineer, working on a subset of systems.

A quality assurance (QA) engineer is responsible for ensuring that newly created versions of software work as expected. Depending on the role, some QA engineers work manually to verify applications, whilst others will work in a highly automated fashion, writing code to test applications.

💵 Earning potential? Low, $84K USD (Source) – Some QA engineers, especially those working with automation, can command high salaries. However, due to the fact that some roles have a manual element, which can be low-skilled, the compensation on average is lower than for other roles.

💻 How much coding? Low – Some QA engineers work on automation and write a lot of code, however, there are many QA roles requiring only a limited understanding of software and programming.

👶 Suitable for a beginner? High – Due to some QA roles working with manual verification, the QA role can be easier to land than others. In some cases, it will be possible to learn some automation and whilst working, and eventually move into more technical positions.

Cloud support engineers work to resolve customer queries. Support roles are often created to ease the pressure between customer requests, and the busier, more technical members of the business, such as software engineers. Depending on the role, some technical skills may be required.

💵 Earning potential? Low, $85K USD (Source) – Due to the lower technical requirements of the cloud support engineer, the total compensation is lower than for other roles.

💻 How much coding? Low – Very little, or often no coding is required to become a cloud support engineer. An understanding of the companies product is usually required, which might be technical, and there may be some interaction with some cloud services in order to complete the role.

👶 Suitable for a beginner? Cloud Support is one of the most popular roles entry-level roles to the cloud industry due to the lower barriers to entry. One criticism of the support role is that sometimes positions do not give much exposure, or room for learning and growing as expected.

Which Role In The Cloud Is Best For A Beginner?

Naturally, the next question you might have is: “which role is best?”

But that’s a very difficult question to answer.

I’ve met people who have broken into the cloud industry through every role listed here. I see many people enter the industry via the support role, due to the low barrier to entry, however that shouldn’t put you off aspiring to take on a more technical role such as a software engineer or cloud engineer.

If you think some of the roles here might suit you, what I’d suggest your next step is: start to look through different job descriptions, which should start to give you an idea about the skills required and create a learning plan.

Because I recommend this approach so often, I put together a YouTube video going through 100 Cloud Engineer job descriptions to show how I’d do it.

I hope that helped to start you off on your journey to understand the different roles in the cloud industry, do your research, reach out to people already in the industry, and make a decision that’s right for you.

If you’re looking for resources to get into the cloud industry, I’ve collated some of my favorites here.